Beauty from The Beast®

It’s a hot one in the grinding yard at Akron’s Finest Mulch. The thermometer says it’s in the mid-90s shortly after 1 p.m. at the tail end of July. There’s no shade or breeze to relieve the summer heat. If Mario Halasa feels the heat, he’s not showing it.

The owner of Akron’s Finest Mulch, a company that has grown by leaps and bounds since it’s beginnings, is keeping an eye on a number of things. He’s got a busy yard of employees getting ready to produce colored mulch – probably for the last time this season. He’s got tree care companies constantly dumping off trimmings – fodder for his mulch grinding operation. And his Model 3680XP is ready to rumble to life and get to regrinding and coloring mulch.

Mario and his father got into grinding mulch years earlier after discovering the price of mulch kept increasing. They had owned a landscaping company at that time, so they were intimately familiar with the price of mulch.

"It was crazy how the price of mulch was going up and up and up," he said.“These guys must have been making a decent amount of money regrinding material that’s given to them, so I thought we should start making mulch. And here we are.”

They bought the property where the company is now located, on Copley Road in Akron. Since then, the company has continually grown. It started out by hiring another company to grind material into mulch. Eventually they purchased their own grinder. 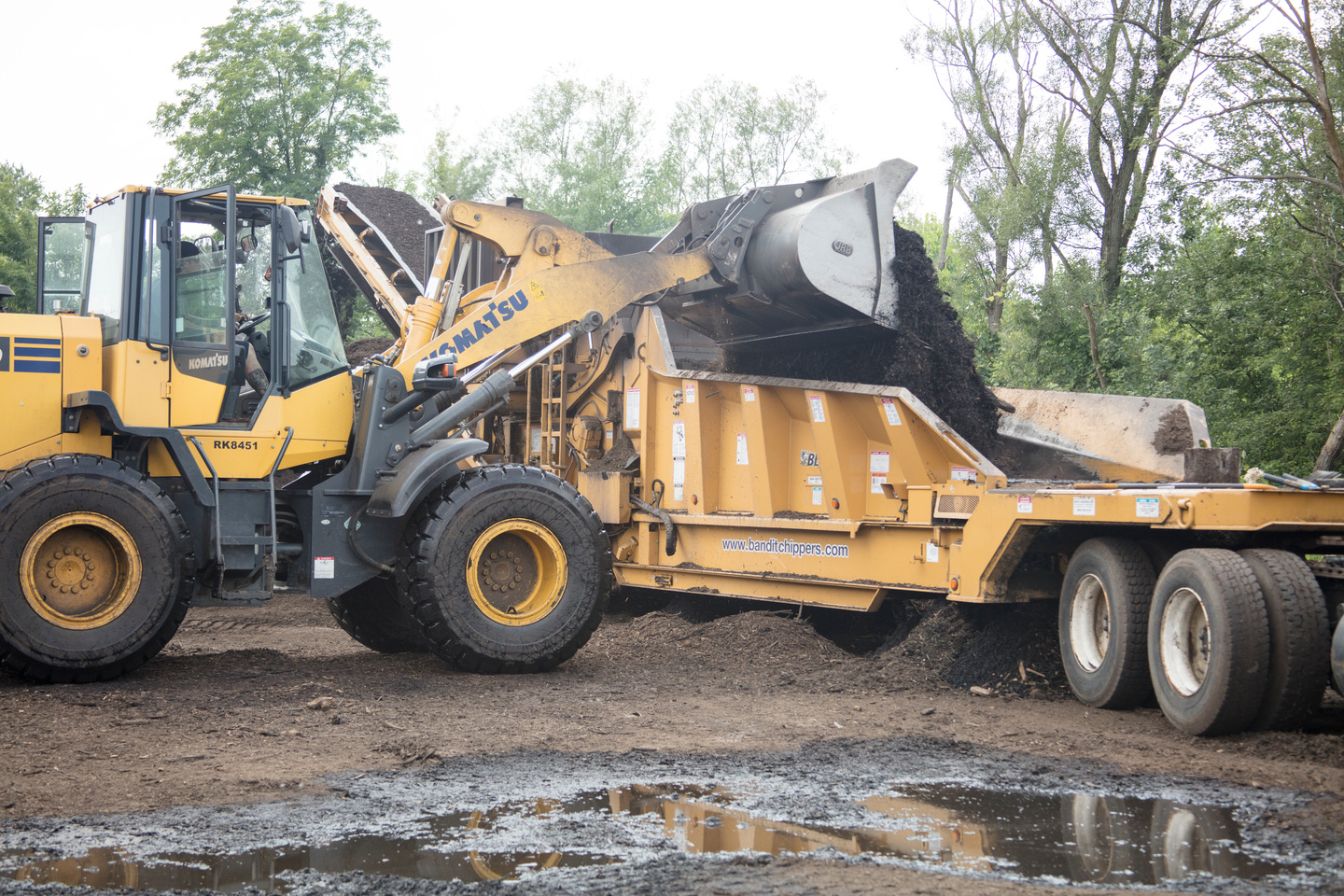 Today, Akron’s Finest Mulch produces a variety of colored mulch. They have done custom color orders, but most of it’s the standard, popular colors. Piles of red, brown and black mulch are all over their yard. Customers can come buy it by the truck load, or even the semi load. 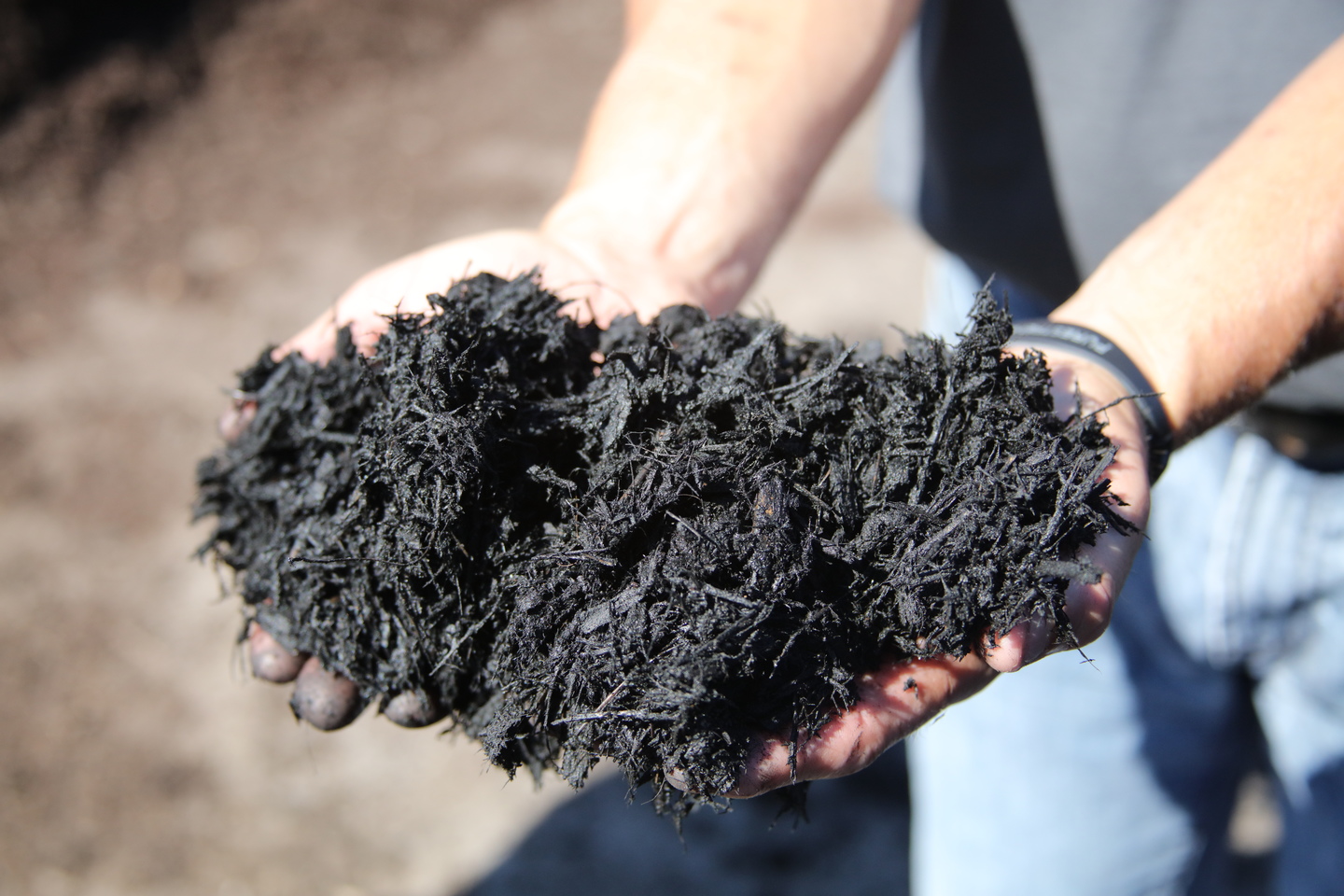 Tree care companies and local residents keep Akron’s Finest Mulch stocked with fresh material to grind – a deal that works out to be a win-win for the community. Residents and businesses have a place to get rid of their tree branches, stumps and chips, and the Halasa’s have a revenue stream and free material to grind into colored mulch.

“We’ve had people tell us they love how they can drop off material,” he said. “We don’t charge much for a dumping fee. We just ask that it’s clean material without metal or other contaminants. And that’s what becomes our mulch.”

As a result, the locally sourced material provides healthy, organic mulch. No recovered wood waste, like pallets are ever used in their mulch.

“It’s all organic, pet friendly, eco-friendly stuff,” he said. “The color is high quality so it won’t wash off in the rain. We shoot for a nice rich color, and we can do that with The Beast.”

Copley Road is a busy road north of downtown Akron surrounding on all sides by businesses and homes. The Halasa’s new they needed a grinder, and they needed to stick with a horizontal grinder. A tub grinder just carried too much risk of ejecting material into the air. They kept looking for the best horizontal grinder on the market to process their material and color the mulch. They never gave their business to any grinder manufacturer – every company had to earn it.

“We actually planned on buying another horizontal grinder,” Mario said. “But we had them in for a demo and it just didn’t go the way we planned. They had issues with the coloring. It just didn’t do it.”

On a whim, the elder Halasa called up a Bandit sales rep he had known for years and asked for a demo. Bandit obliged, and Akron’s Finest Mulch was blown away with the Model 3680XP with the Color Max.

They found that the Model 3680XP was capable of producing up to 300 cubic yards of colored mulch per hour, using less water and color than their previous grinder and coloring system, and produced a finer end product. 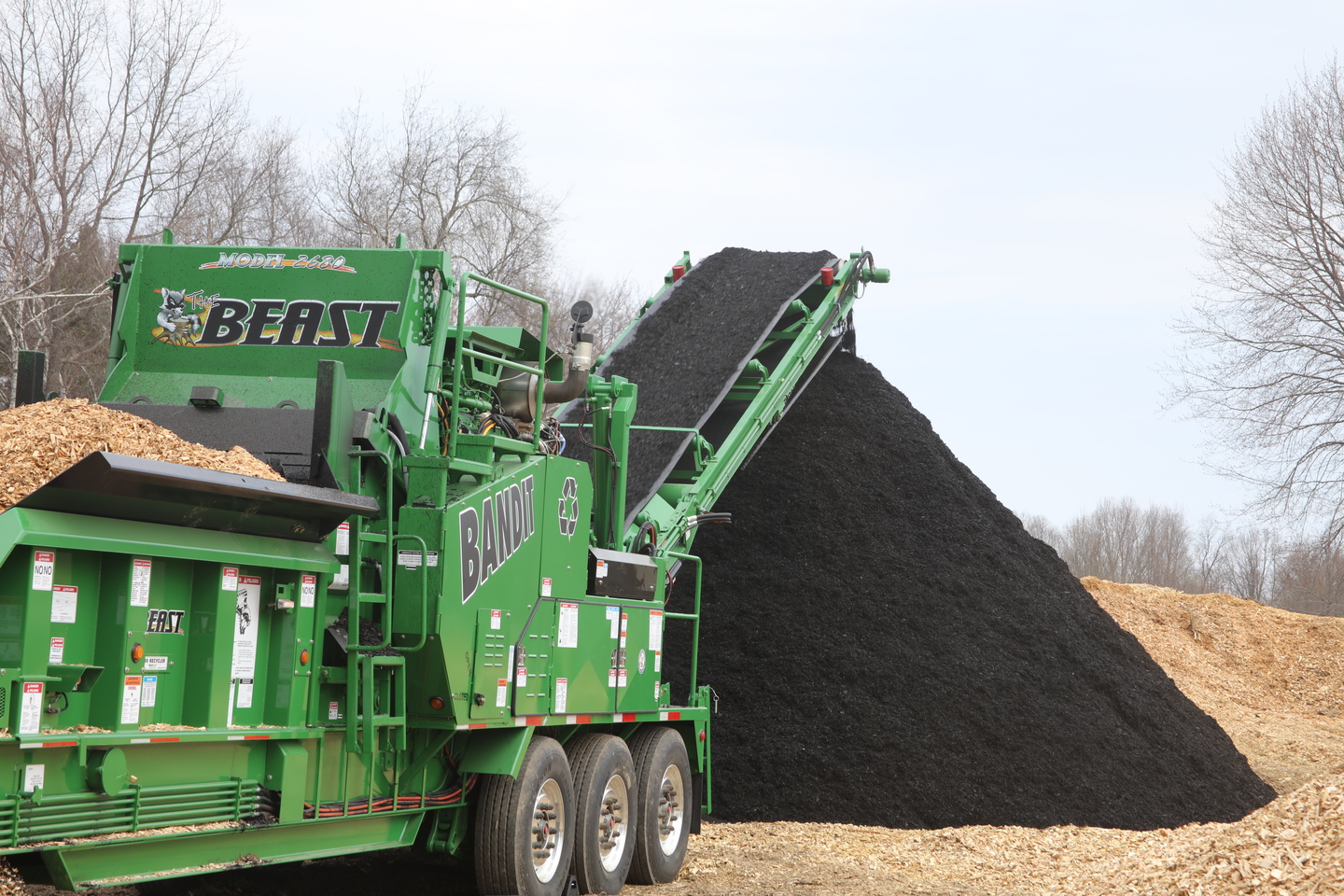 A brand new Model 3680XP was purchased with a Caterpillar C18 765 horsepower diesel engine. The patented downturning cuttermill is set up as a 30-tooth mill. Bandit increased the mill speed on the 30-tooth mill to process material faster and get material to exit the grinding chamber faster, so it’s perfect for mixing color. The 3680XP is one of Bandit’s most popular horizontal grinders, featuring a massive 35-inch tall by 60-inch wide opening.

With their Model 3680XP, they’re actually having to dial the grinder back so they can keep up with it.

“We could produce upwards of 300 cubic yards an hour if we had two loaders feeding it at the same time, but I like to keep one loader on it,”

“If you get too many loaders around it, you start wrecking into each other.” But even with the one loader feeding The Beast, they’re still getting 275 cubic yards per hour.

“That’s insane,” Mario said. “Before we were getting maybe 125. That rate is fine if you have to run the material through a trommel. That slows things down, but you don’t need it with The Beast.”

Akron’s Finest Mulch is also impressed with how efficient The Beast and Color Max system is with water. Their previous grinder and coloring system was thirsty – demanding up to 60 or 75 gallons of water per minute, or more.

“Who can produce that much water out of a 2-inch pipe,” Mario said. “With The Beast, we’re only needing 35 to 55 gallons of water per minute, depending on the material, the color and the size. If we have wetter material, we can even go down to as little as 25 gallons per minute.”

The secret to the Color Max system’s efficiency is also The Beast’s patented cuttermill. Color and water are applied directly to the mill, which is the perfect tool to stir the color and water with the mulch. Material comes out evenly coated, beautiful, and because it uses less water, drier.

That means it ready for sale sooner.

Bandit’s Color Max system is composed of an external controller that will typically sit near The Beast. A water source is run to the controller, and another line is hooked into the colorant. Operators can easily dial in correct amount of color to pump based on the flow of water, and the quality of the colored mulch. It’s so simple that one operator can do it. In fact, it’s designed that way.

Everything is accessible via remote controls. From a loader feeding The Beast, the operator can control all the functions of The Beast, start and stop the flow of color to the mill, and monitor the color quality.

“That’s huge. You can get a fine consistency of color essentially 98 percent of the time,” Other machines, they miss color and you take the scoop out, it’s a hundred bucks right there,” he said. “You miss color two or three times, that’s $300 bucks down the drain.”

The simplicity of The Beast also drew them to it, he said.

“We prefer a beefier grinder just because we run a lot of heavy material, and obviously we need a grinder that can produce the amount of color we need per hour,”

“Overall, it’s a complex machine, but it’s simple, if that makes sense,” he said. “It’s easy to remember how to change screens, and do the routine maintenance. The Color Max system is easy to hook up and operate. And the time it takes to switch from one color to another is really fast. In a half-hour to 45 minutes, you can be up and running a new color.”

The reliability of the Model 3680XP was also key – having Bandit’s factory support so close and easy to work with. There haven’t been any serious issues with their Model 3680XP, but if there ever are, he knows the Bandit will be there fast.

“I’m not too mechanically minded, so when there’s an issue with the grinder and we need it back up and running the same day, I rely on Bandit to help me out,” he said. “They help me fix it, or they’ll send me overnight parts. Bandit really stands behind their customers.”

Click here to watch Acron Finest Mulch and  the Color Max in action!