Mike Rowe is standing in the woods. Though he shares a name with the popular television star and clean-shaven host of the show Dirty Jobs, this Mike Rowe is bearded and tall, and he’s absolutely comfortable with his chosen profession. He’s been at home in the woods for years, building his career in the place he loves to be.

Rowe is a foreman for Edwards Landclearing Inc., Ohio’s largest land clearing operation. The 50-year-old company based in Amherst, OH., serves the surrounding states, keeping Rowe on his toes. It’s tough work, but it’s the kind of work he likes. 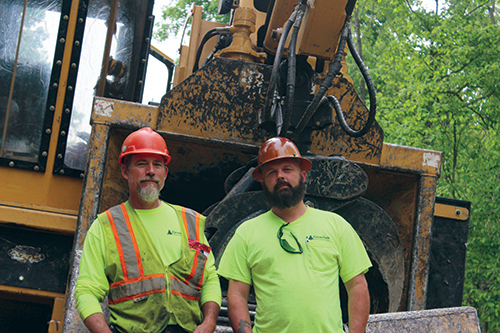 “I’ve been with this company for 23 years, and I’ve been around this kind of work since I was 5,” he said. “My grandfather was in the woods. My great-grandfather and father were too.”

In late May, 2014, Rowe is in the woods just outside of Cadiz, a small town in the hills of eastern Ohio. He’s busy clearing land for a water pipeline project commissioned by the township. His crew needs to clear several thousand feet through woods, next to a subdivision and a golf course. Rowe and his crew will be done in a couple of days, and then it’s on to the next job.

“The best part of my job is being in the woods,” Rowe said. "I’m outside as much as I can be.”

That attitude helps with the long days on the job and the weeks away from home. And that happens quite often, as the booming oil and gas industry in Pennsylvania and West Virginia keeps land clearing crews busy, clearing paths through forests and prepping ground for new pipeline construction.

This is maybe the third or fourth track chipper that we’ve bought from Bandit. This is the best one yet.

But in Cadiz, Rowe’s only concern is the job in front of him, which includes a muddy slope. To keep working in such situations, Edwards Landclearing purchased a Bandit Model 2290 Track whole tree chipper. One of the more popular track machines from Bandit Industries, the Model 2290 in Edwards’ fleet features a 600-horsepower John Deere diesel and a 20-inch diameter chipping capacity.

Rowe went through first with a forestry mower to clear out the brush, and then used an excavator to fell and stack trees along the planned path. The Model 2290 Track then came through to chip the whole trees left behind, broadcasting the chips throughout the job site for erosion control.

Rowe and his team have been impressed with the machine since they began using it.

“This is probably the best chipper that we’ve run,” Rowe said. “It’s set up for mainly pipeline, but we can load chip trailers with it.”

He added that anyone loading a chip trailer with the 2290 Track needed to keep an eye on the trailer weight because of how aggressive it throws. Bandit’s proprietary designs for drums, drum housings and discharge chutes are all factors in the 2290’s impressive throwing power. 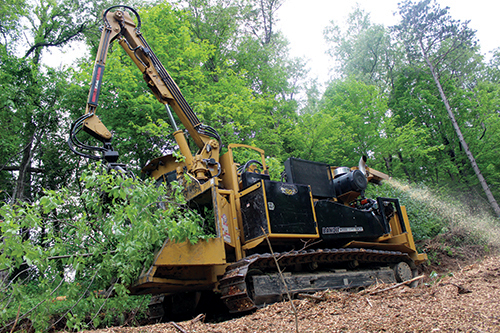 Rowe also noted that the 2290 Track is great for pipeline clearing, and works exceptionally well in tough terrain. In the year-and-a-half since the company took delivery of their machine, it has always performed great, he said.

“Doing pipeline, it seems like they run them in the worst spots that you can get,” commented Rowe. “It’s been on some pretty steep grades, some pretty muddy spots. We’ve chipped pretty much as big of stuff as we could fit in the throat. If you can get it started in there, it’s gone.”

Of all the other competitive chippers that Edwards Landclearing has used over the years, Rowe said he prefers using this Bandit. The only thing he would change on the 2290 would be to add a stereo. “The cab is a lot quieter, designed a lot better. I haven’t personally had any issues with it, other than if you’re sitting in it 10 or 12 hours a day, you want to hear some music. This is maybe the third or fourth track chipper that we’ve bought from Bandit. This is the best one yet.”

The cab is roomy enough to easily fit an adult, and it comes with the climate controls to keep the operator comfortable in all conditions. And with the eastern Ohio area subject to hot, muggy summer days and cold winters, having a pleasant place to work is critical to staying productive 365 days a year.

It’s been on some pretty steep grades, some pretty muddy spots. We’ve chipped pretty much as big of stuff as we could fit in the throat. If you can get it started in there, it’s gone.

“It’ll chip about anything you can stick in it,” he said.

Edwards Landclearing was founded in 1964 by Carl Kopocs and Ron Edwards. The two men worked together to take down a tree, and that job lead to another one, and another one. The jobs kept coming, and Edwards Landclearing was born. After 22 years, Edwards retired from the company and Kopocs took over, opting to keep the name the same. “By that time, we had a name established, so I just left it,” he said.

From those humble beginings, Edwards Landclearing is currently the largest tree care company in Ohio, employing nearly 50 people and conducting land clearing operations for some of the country’s largest companies and municipalities. Projects range from preparing ground for roads, to commercial construction, and pipeline construction. Most recently, the boom in natural gas from the Marcelleus Shale formation in eastern Ohio, Pennsylvania and West Virginia has kept the company jumping.

But it was in the early 1980s that Kopocs happened upon a new company in Michigan building wood chippers. After a personal demonstration by Bandit founder and co-owner Mike Morey Sr., Kopocs struck a deal to purchase the second Brush Bandit chipper built.

“It was hot that day,” Kopocs said. “We had this big limb we wanted to put in there. It was maybe 40 feet long and 6 inches in diameter. We put that thing in there, and the front end of the chipper comes up slightly, and the chipper starts going down the driveway backwards, eating the limb.”

That performance sold Kopocs on the Bandit, but it was the personalization and customer service that kept him with the company. He had an engine he wanted to use, so he sent it to Morey who in turn built the chipper around it.

“I sent the engine up, and a few days later, a chipper came back,” Kopocs said. “That’s the beginning of us and Bandit.”

Since then, Kopocs and Edwards Landclearing Inc., purchased many other Bandit machines, including additional hand-fed chippers, Beast horizontal grinders, stump grinders, and the current Model 2290 Track that was built specifically for their operation.

And that operation, it seems, keeps growing, adding work for the bustling crews. Rowe said he has been working 23 years with no layoffs since he first started. It’s good work, and it keeps him busy. It also keeps the big track chipper busy. Very busy.

“We’re at work five days a week, all-year round,” Rowe said. “This thing has been running since we got it. It doesn’t sit. It’s not happy unless brush is going through it.”