Wayne Cooper weathered his first hurricane in 2004, when Hurricane Charley slammed Florida. The category 4 storm made landfall in Florida near Ft. Myers on the gulf coast, and continued in a northeastern direction toward Wayne’s family and home in Arcadia. “We lost everything except one shop,” Cooper said. “That storm was small, but it was like a big tornado.” 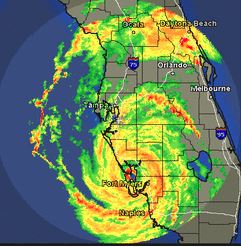 Despite the danger, they weren’t expecting the storm to reach them. Then Hurricane Charley took a quick turn inland and toward heavily populated areas, giving the Cooper family very little time to prepare. So when news of Hurricane Irma broke in September 2017, the family wasted no time getting ready. “I guess you could say we were ready,” Wayne said. “I was more concerned about the water because we were going to get all that rain and we were already real wet prior.”

Hurricane Irma took a similar path into Florida, making landfall near Ft. Myers and continuing northward. It was a larger storm than Charley was more than a decade earlier, but the winds weren’t as severe. It was also slower moving, but it brought much more rain.

“It didn’t do us any damage at our home and shop,” Wayne said. “We lost a lot of trees, and we were without power a few days. Then, of course, there was work all over the state.” 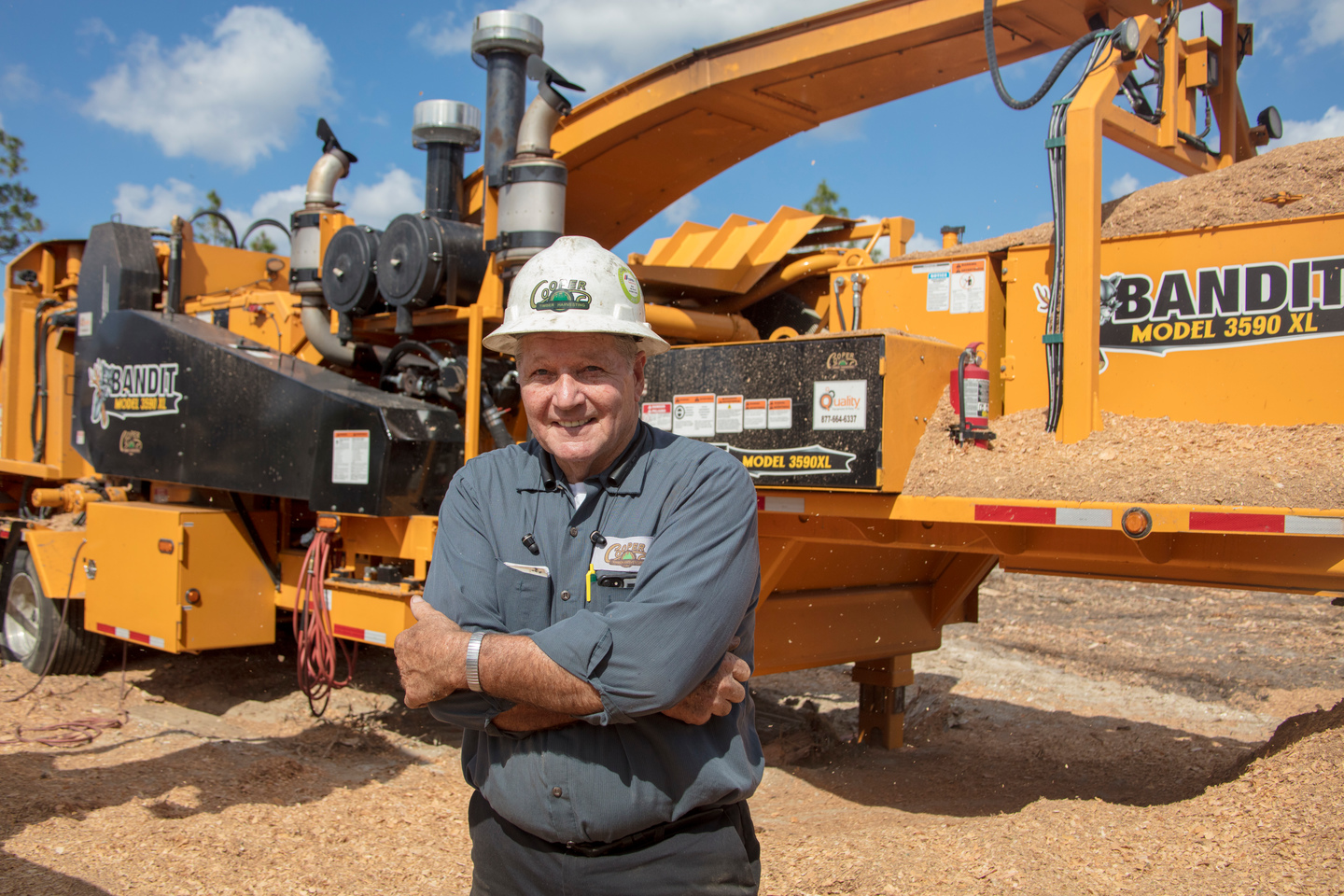 Wayne is the owner and president of Cooper Timber Harvesting, so he knows about clearing trees. So does his youngest son, Jason, the vice president of Cooper Timber Harvesting. Since Hurricane Irma thrashed Florida, the father and son have been busy chipping and grinding storm cleanup with their Bandit Model 3590XL whole tree chipper and their Model 3680 Track horizontal grinder. Their last official storm cleanup job ended on Feb. 12, 2018, almost five months after the storm.

Jason was 16 when Hurricane Charley blew over. When Irma came knocking, Jason, now a father himself, said they were ready. “I was a little bit worried, because it was the biggest storm ever recorded coming at us, but we took precautions,” he said. “I guess you could say we were a little over-prepared.”

Not everyone was so lucky. Hurricane Irma was the deadliest Florida storm in recent history, as well as causing considerable damage over a broad area. The reason was the unusual path it took, according to the National Weather Service.

“Historically, the storms come from the east or the west – the Atlantic or the Gulf,” said Anthony Reynes, a National Weather Service meteorologist. “It caused significant damage because it moved from south to north. It covered the entire state. That it went the entire length is ‘fairly rare.’ That’s what made it dangerous.”

In total, 102 people in the U.S. died from the storm, and it caused $50 billion in damage on the U.S. mainland. Accounting for all the territories hit by Irma, 146 people died and the damage exceeded $64 billion.

The Coopers came through the storm unscathed. It wasn’t long before they were back to work, helping dig out friends and neighbors, and working with power companies to deliver power line poles.

The work seemed like it was unending, yet the Coopers were ready and able to help clean up. 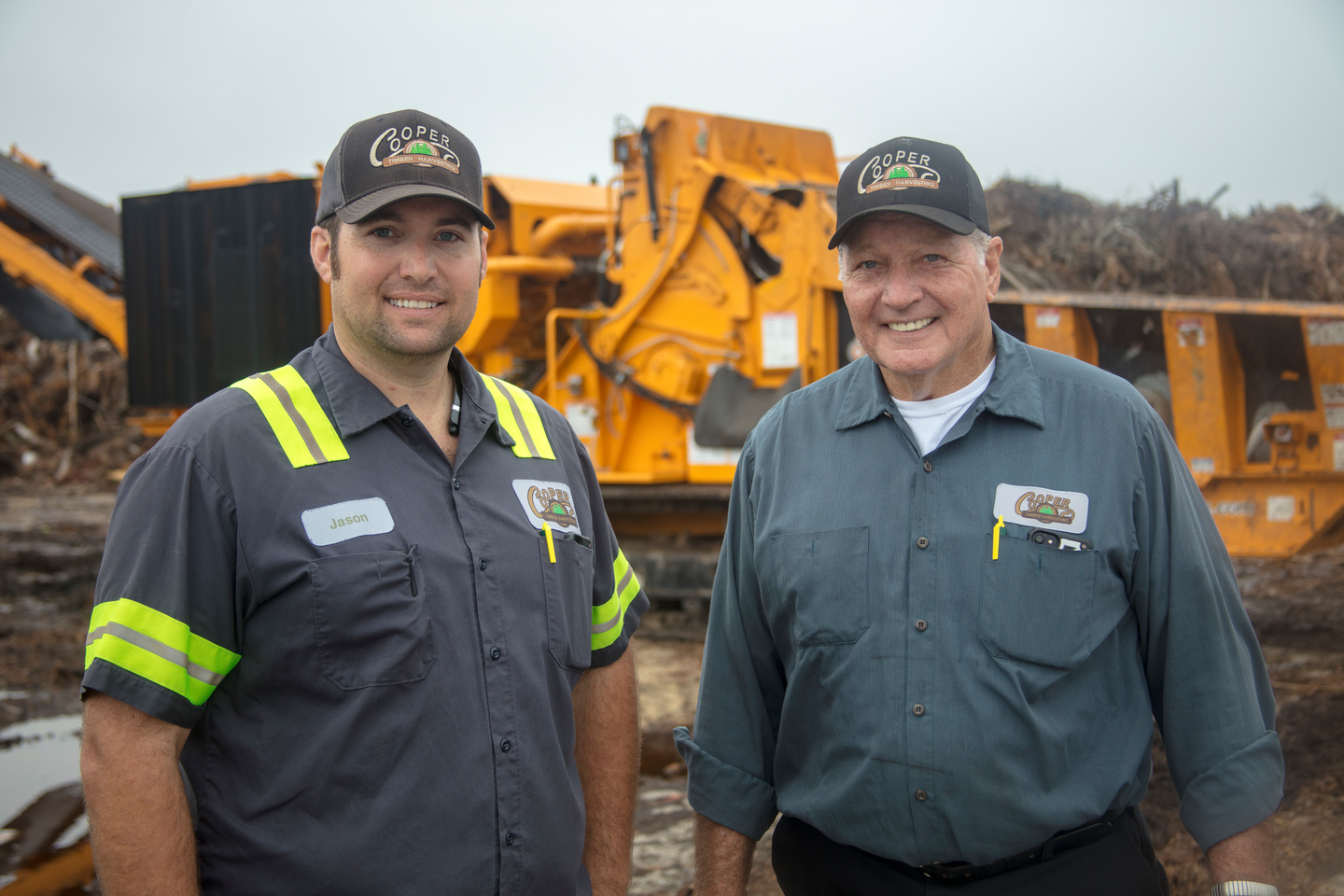 Wayne Cooper is a man who loves raw horsepower. Fast cars, big trucks; it doesn’t make a difference. The more horses under the hood, the better. Even when it comes to wood chippers. 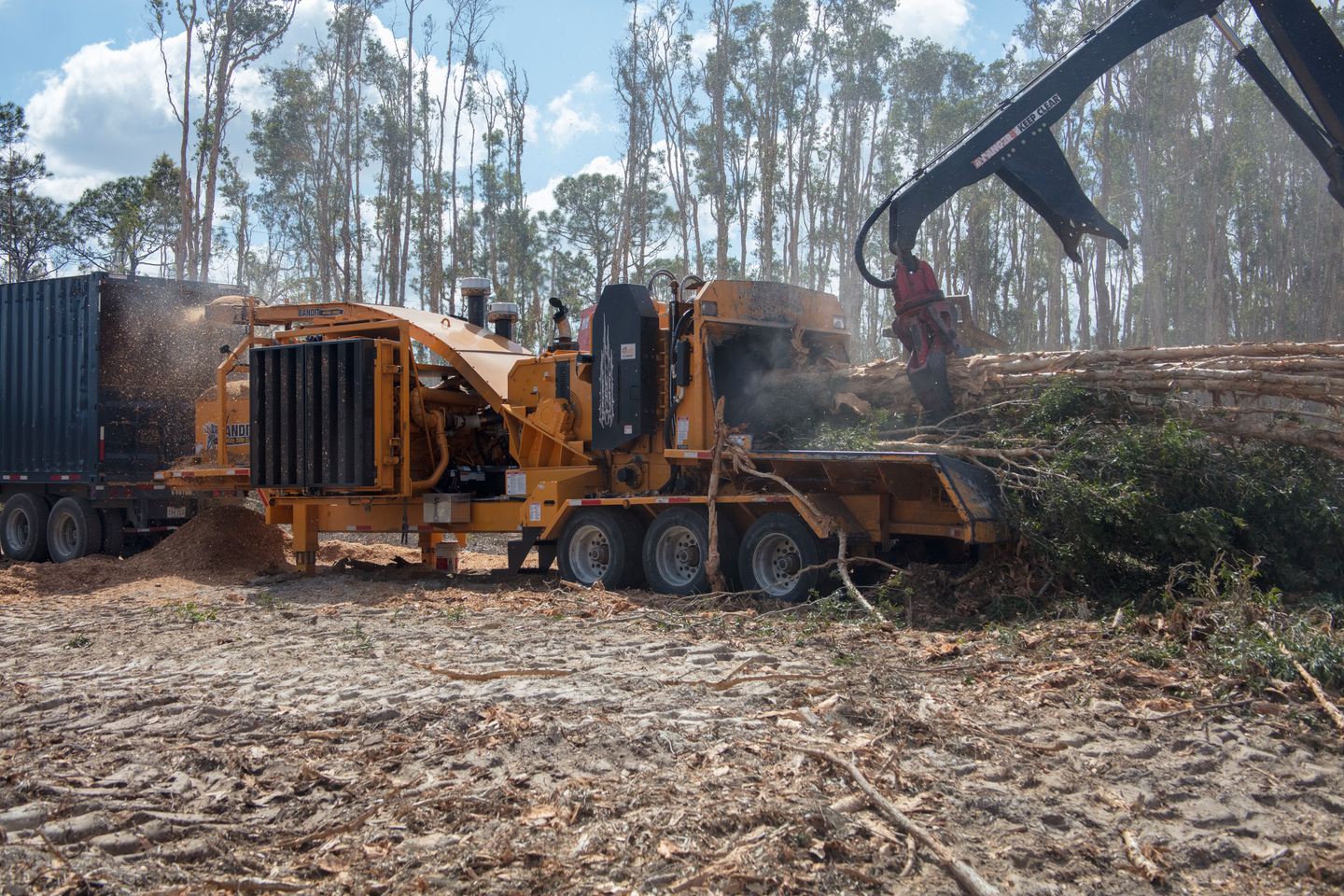 That’s what drew him to his 1,200 horsepower Bandit® Model 3590XL, 35” capacity whole tree chipper. Wayne was already a longtime Bandit customer when he got to see his 3590XL run. He’d been sold a long time ago on Bandit’s commitment to its customers and equipment.

“When we decided we needed to buy a chipper, we didn’t know anything about chipping,” he said. He did what any good businessman would do – he called chipper manufacturers up, told him what he needed and arranged for demonstrations. Bandit was the first company to respond.

“Mr. Jim Muterspaugh called me and says, ‘I’ll be at your office in the morning.’” He was, with a Model 3590, 30” capacity whole tree chipper in tow. The chipper impressed Wayne, but what really set Bandit apart from the competition was the responsiveness of the company and their promise to stand by Wayne and his chipper.

Muterspaugh left the 3590 to sit in Wayne’s parking lot while he made up his mind. It didn’t take long after that, especially with the constant reminder right outside his door.

Now, their land clearing operation with the 3590XL works like this: One cutter works a day ahead of the chipper, preparing material to chip. They do that so the massive chipper isn’t waiting for trees. “Fifteen or 16 loads by lunch is easy, so you know, we can load 25 to 30 loads, easy,” Wayne said. “The 3590XL, with 1,200 horse in it? It just chips some wood.” 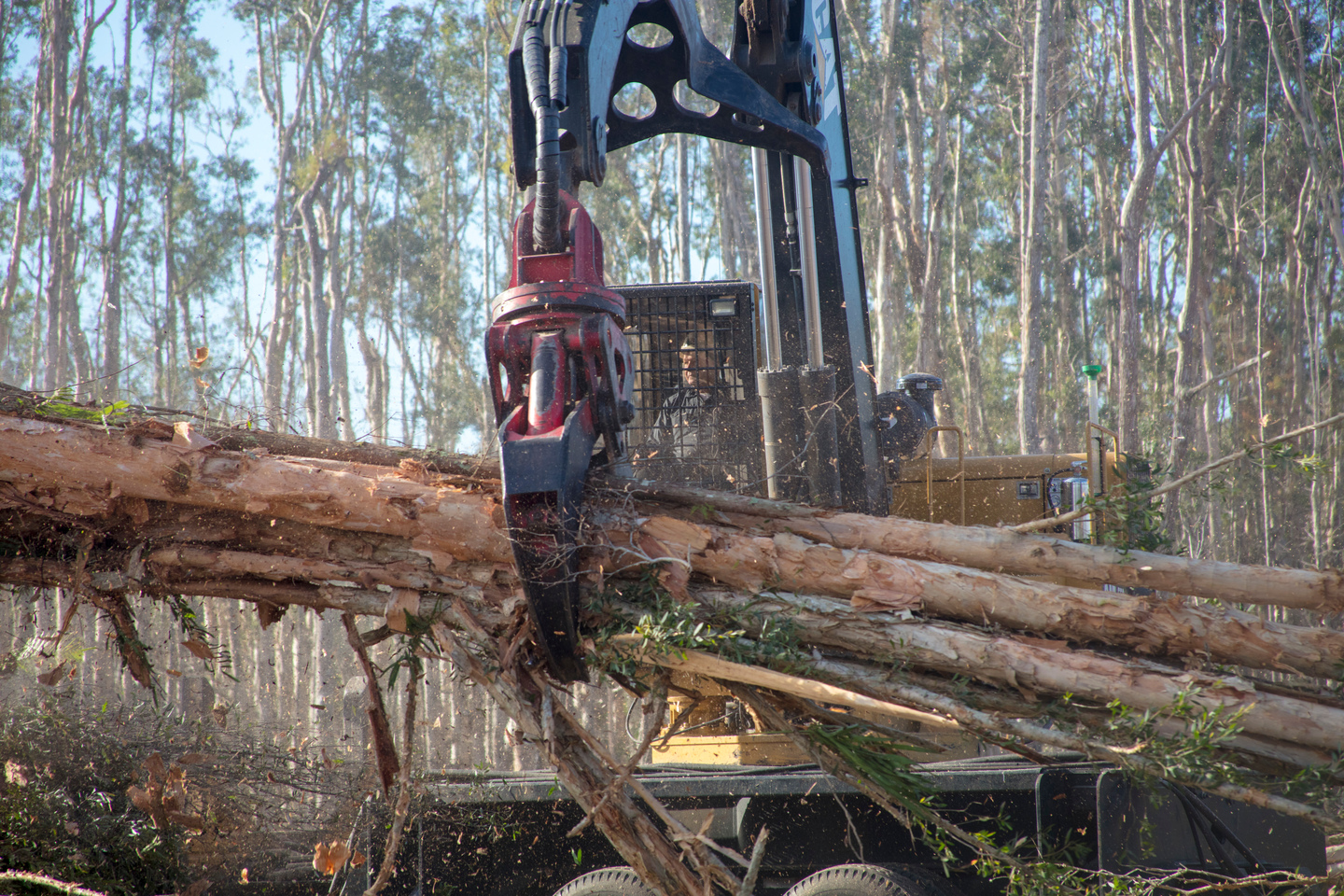 That helps when there’s literally thousands of trees down after a hurricane, and the 3590XL played a major role in cleaning up after the storm. “We’re still dealing with storm cleanup. We had all kinds of calls. We finish one site and head to another,” he said.

But even with 1,200 horsepower and 36” capacity, the Coopers knew they needed something in addition. 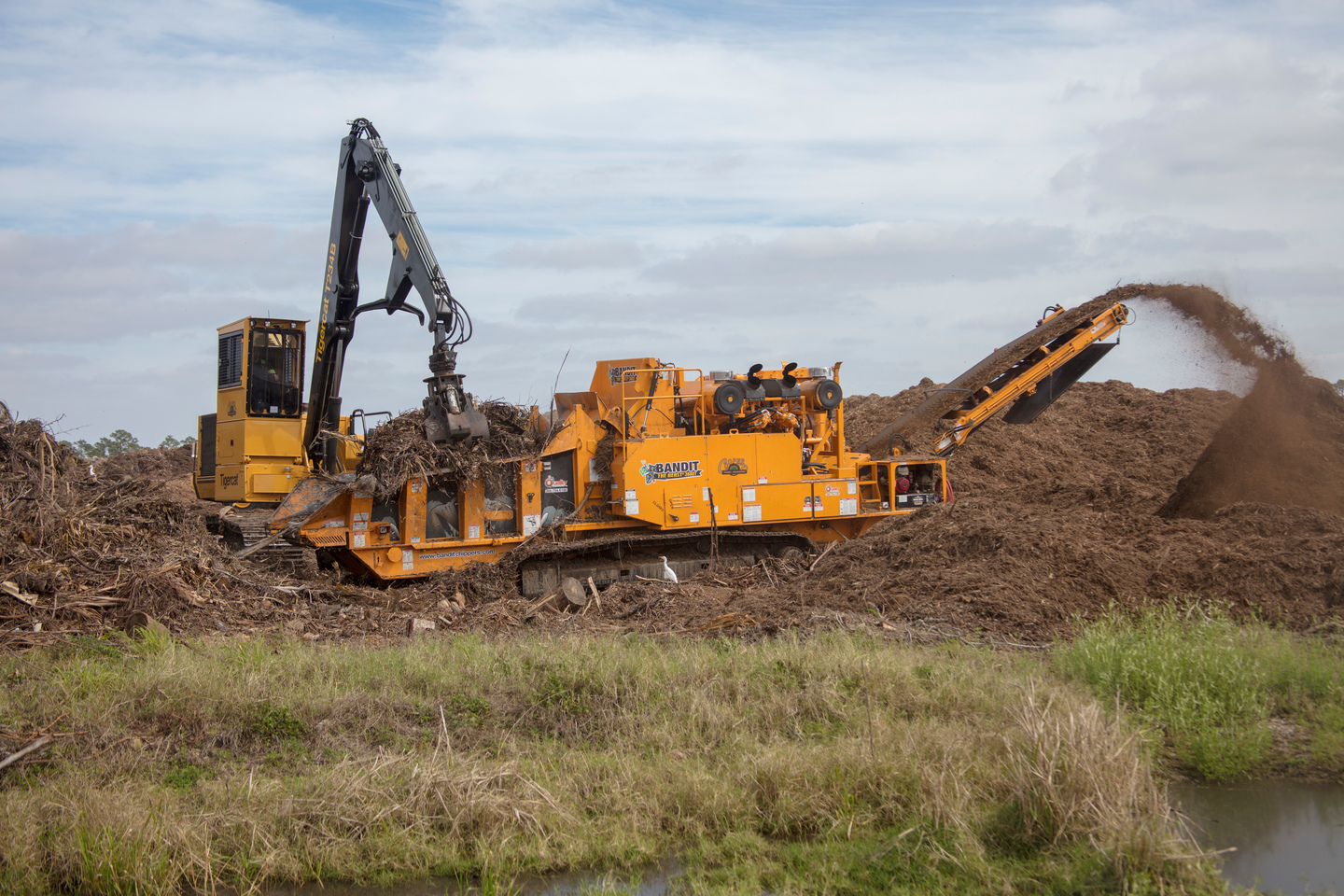 Even before Hurricane Irma, the Cooper Timber Harvesting had already determined they needed a horizontal grinder. Their business was growing in that direction with new environmental regulations that prohibited burning of land clearing slash. Their first instinct was to contact Bandit Industries.

“We made the call to [Bandit authorized dealer] Quality Equipment before the storm and I asked him if he had any grinders available,” Jason said. “He said he’d be getting a Model 3680 Track. That was scheduled for delivery the Friday after the storm was supposed to hit.”

Within two weeks of the day Irma made landfall, The Beast was on the ground, ready to work. The initial plan was to demo a number of grinders and compare them before making a decision, even if they were already leaning toward The Beast.

“We were pretty set on the Bandit, but you know, once again, Bandit had the machine on the ground and ready to work,” Jason said “No one else did. But after seeing it run like it did, I liked it.”

Jason, never having run a grinder before, was understandably cautious about investing in a grinder, but again, his past experience with Bandit Industries made a difference.

“Just knowing that the service we’ve gotten from Bandit and the good quality of the chippers, we knew we probably wouldn’t make a mistake going with the grinder,” he said. 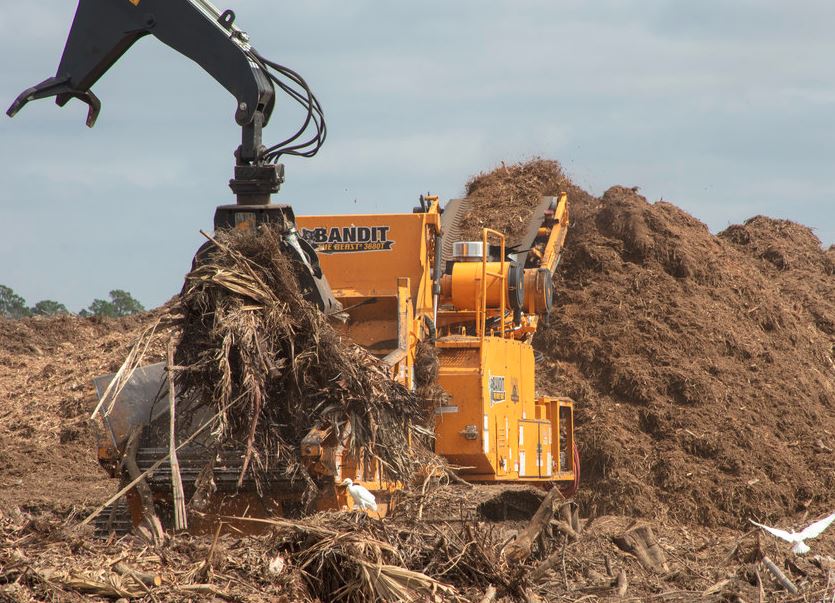 Their Model 3680 Track, outfitted with an 875-horsepower Caterpillar diesel engine and CAT 325 EL triple grouser steel tracks, was completed in September 2017 and arrived in Florida shortly after. This unit wasn’t built specifically for Coopers, but it was designed to power through green waste with its 30-tooth mill. Bandit Industries’ patented downturning 30-tooth mills are proven tools for effectively processing green waste. This is due to the unique teeth and raker options, higher mill RPM and The Beast’s downturning cuttermill. The rakers and teeth size material on the initial cut, rather than relying on the machine’s screen to size material. This is especially important when processing difficult-to-grind palm fronds. 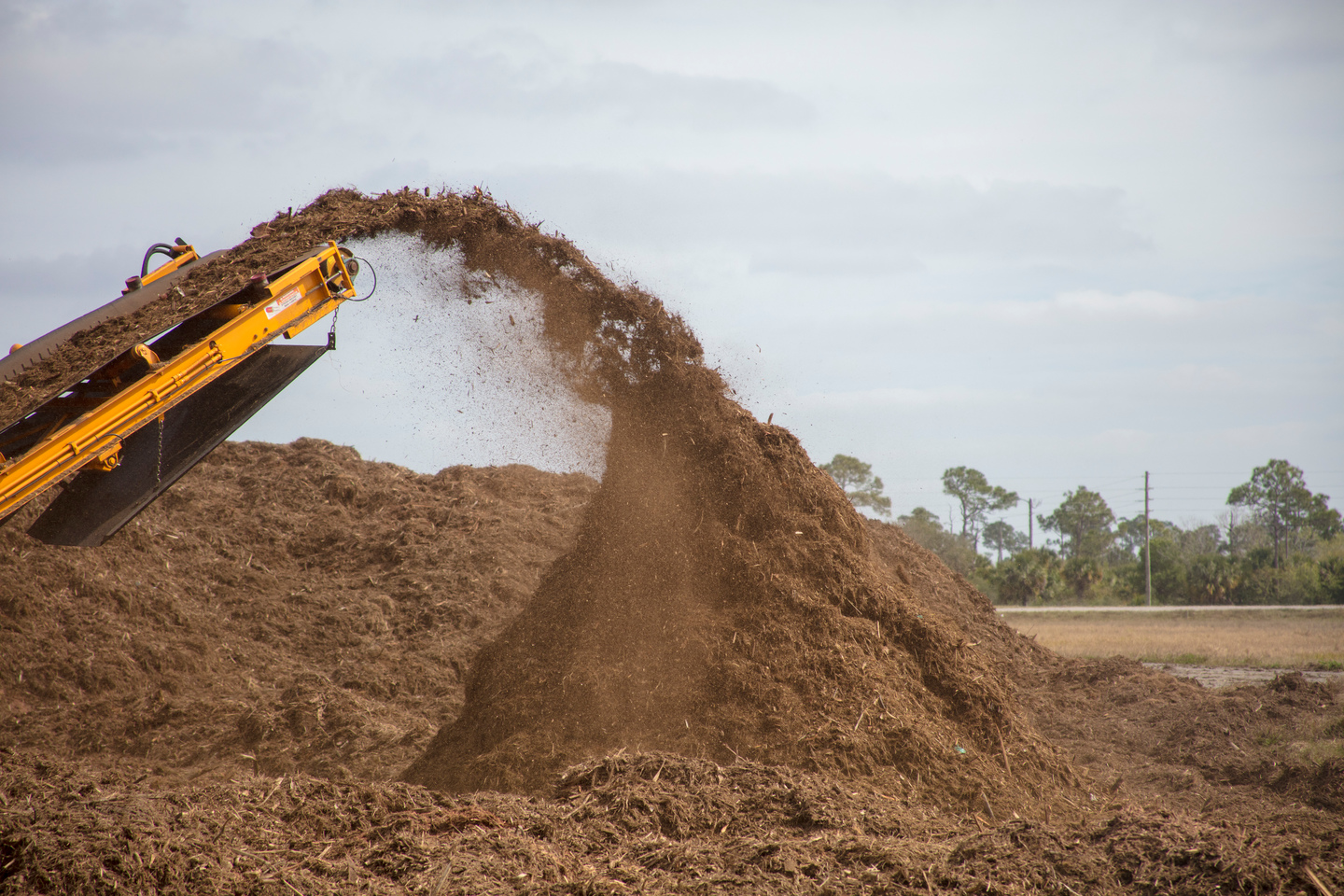 The tracks make it exceptionally easy to position in a variety of grinding areas, and Jason takes advantage of that mobility. When loading his machine, he’ll track in close to his materials pile. This makes work more efficient, so he’s able to get more done during the day. He’ll have one other operator run a loader tractor pushing the mulch piles around to keep the grinding area clean.

“I’ve been coming out in the woods since I was a little kid, and I started operating equipment when I was about 12 years old and just went from there,” he said. “I wanted to be out here since I was a kid, and that’s pretty much all I’ve done.”

Jason worked as an EMT and firefighter for the fire department in DeSoto County for a few years, but even then he eventually returned full-time to the woods, working shoulder-to-shoulder with his dad.

“You could say a few things, but they’re mostly good,” Jason joked about working with his dad. “We butt heads from time to time, but I tell him that’s just because he trained me to be as stubborn as he is.”

That stubbornness plays to his advantage. When it comes to maintenance, Jason makes no compromises. Every workday starts early in the morning with daily machine maintenance. Teeth are tightened and changed, the machine is checked over, and only when everything has been done correctly is the machine fired up. And then at the end of every day, the 3680 Track is shut down and thoroughly cleaned with compressed air. Everything is checked again, and only after the correct shutdown procedures have been completed do they leave the jobsite and begin the drive back to their Arcadia shop.

“Maintenance [on any grinder] is probably one of the big reasons we held off,” Jason said. “Maintenance wasn’t that bad with our Bandit chipper, and the grinder has been the same. It’s really easy to change teeth.”

He also sees the thoughtful design that went into making maintenance items easier to access. That makes a huge difference for a lean operation without a lot of equipment or employees. They need their machines to perform.

“We rely on our Bandit chippers to work every day for us,” Jason said. “So far, they have done a good job.”