Finding the Value in Shingle Waste

It's a cold morning in Oakland, California; a stone's throw from the Pacific Ocean. But things are looking up quickly for Josh Fookes and The Beast® — a Model 3680XP Track built specifically for Fookes’ company, Asphalt Shingle Recyclers. Awaiting The Beast is thousands of pounds of roofing shingles, and it looks like a big job — the shingles are piled high, towering over the Model 3680 Track — but looks are deceiving. The Beast roars to life and a front-end loader dumps in the first load. 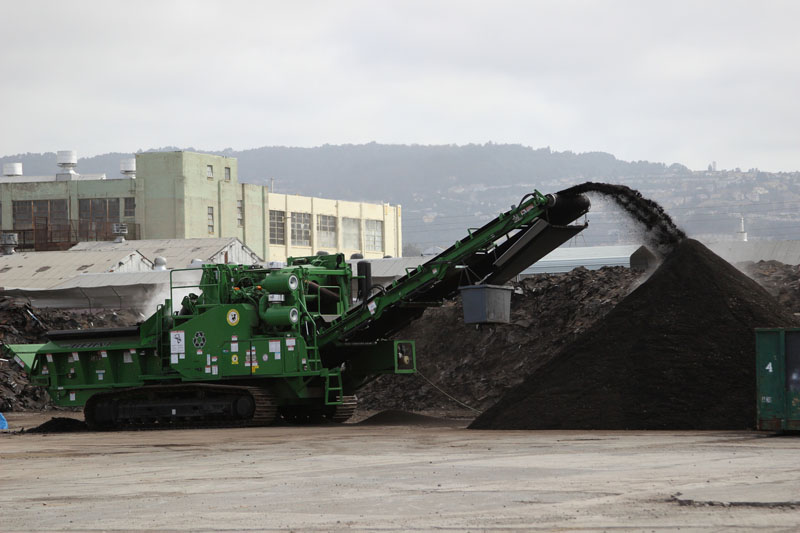 “I’ll say this - shingles are a dirty job,” said Fookes. “There are not many fun parts in that job. If there was going to be another Dirty Jobs TV show, this would be one of the candidates for that. But I like that we get to complete the cycle of a material that has been problematic for landfills, so that’s a great story to tell in this industry and the waste industry. And being able to take a product that was once landfilled, re-purpose it into a product that can be recycled and reused over and over and over again, is a great story to tell.”

Fookes stands about 60 feet from the action, watching his small crew work around the grinder. He looks satisfied with the work, but he knows there are some things about the shingle grinding business that are out of his control. The California Department of Transportation has been dragging out the adoption of a standard spec for state roadway projects, but they’re getting closer. Road projects that can use recycled asphalt shingles (RAS) are limited to private and local municipal jobs, so the demand isn’t consistent.

But Fookes doesn’t sound worried. He did a lot of homework before diving into the world of shingle grinding, including looking at many horizontal grinders from many manufacturers before deciding on the Model 3680 Track. “One of the big things for us when we were considering buying a grinder was sizing on the first pass. We didn’t want to have to try and screen it later,” Fookes said. “We were an infant business, and going through and buying a lot of new equipment wasn’t really on the top of our have-to-do list.”

The shingle grinding industry is also still relatively small in California. Fookes said it’s because there’s so much uncertainty about the RAS market. As of Aug. 2015, Caltrans only has provisional specs for the use of recycled asphalt shingles as hot mix asphalt supplement. That could change any time, though. “For California, we’re at that crest in the wave,” he explained. “Everything’s lined up regulatory wise. Caltrans provisionary spec is in place. It’s nearing its full implementation as a standard specification product. Once that happens, we do anticipate there to be a huge increase in the demand for the RAS product.”

One of the big things for us when we were considering buying a grinder was sizing on the first pass.

There’s plenty of evidence to suggest that California is getting ready for boom times for recycled shingles. In 2014, the state enacted a provisionary spec for the use of RAS in hot mix asphalt. Since then, it’s been inching closer to adopting that provision state-wide. The state’s proposed spec is on par with what other states have adopted: 100 percent passing through a 3/8-inch screen and 90 percent passing through a No. 4 sieve. That’s nearly like sand. Fookes also said the state has very tight specs in addition to just size. The material can’t be too wet or it won’t mix well in the hot mix asphalt. And it absolutely must be consistent.  “They don’t want big flakes going through into the mix because it causes big problems when they go to put it in asphalt,” he said.

Fookes hasn’t had any problems hitting spec with his machine, though it would be an oversimplification to call it a turn-key operation. There’s plenty of work that’s done before a single shingle is processed by The Beast. Shingles are sorted and metal is removed by a screener. Then those sorted shingles are piled up, waiting for grinding. The water flow into the grinder also needs to be adjusted because too much water and the RAS will be too wet to be effective in the hot mix asphalt. Too little water, and the grinding action could create too much heat and dust. Because of the patented cutter mill in The Beast, grinding creates less heat, requiring less water, and results in a better end product. “RAS is a weird thing,” Fookes said. “It’s shingles from your roof, which is supposed to repel water, but RAS will actually absorb some water. You have to watch it.” 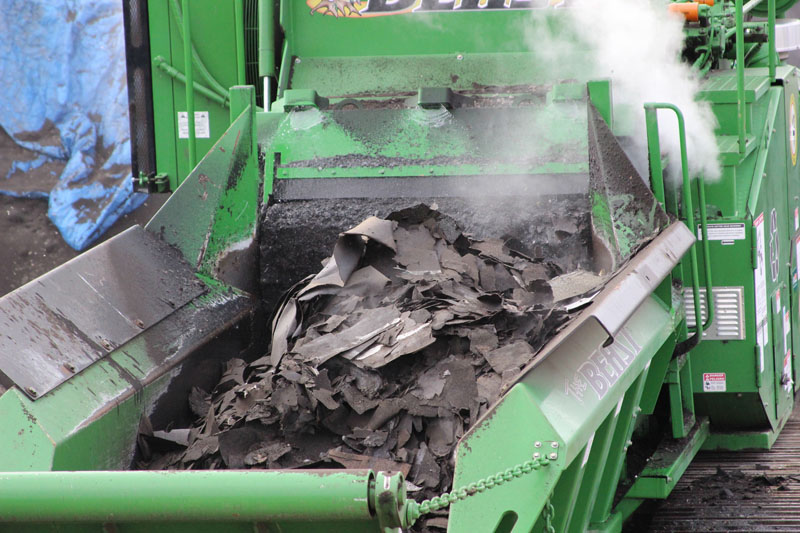 There’s a lot Fookes likes about his Model 3680 Track. High on that list is the steel tracks.  “When we were shopping for a grinder, I needed something that was portable, meaning on tracks. It needed to be able to move itself. Part of that has to do with our permitting in California with the Air Resources Board and the Air District. If we were going to go with a portable unit, that was one feature that was advantageous to us.”

Those tracks turned out to be useful for more than just maneuvering around strict California emissions permitting.  “And because our 3680 is on tracks, we can turn The Beast, open up the gate, and clear out a contaminant when we encounter one. This quickly and easily separates the contaminant on the ground on out of the pristine RAS pile. With our tracks, we can just spin the machine off to he side, open up the gate, get whatever contaminant that’s causing the problem out, close the gate back up, turn back over where you’re producing and you still have a good clean product. That Bandit keeps the productivity there, even if you have a contaminant.”

That’s the thing about the way Fookes does his business. He’s working as efficiently as possible, getting the most out of everything he has, even if it’s not what it was originally intended for — his grinder included.

Knowing that the Bandit could also produce mulch for us was one of the reasons we went that direction.

Caltrans has been moving forward with approving a standard spec for RAS, but Fookes knows that something could happen and the state department of transportation could dial back its use of RAS in hot mix asphalt. That would limit the market for RAS, but Fookes has enough wood waste at another of his recycling sites that he could swap his Beast’s shingle grinding setup for one to produce mulch.

In many ways, Fookes is just like his 3680T. Versatile, capable, and able to adapt on the fly. Perhaps that’s why it’s such a good fit for his operation — just as it’s a good fit for operations all around the world.